First Inhabitants of China were African 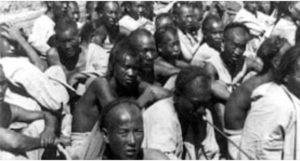 Historians, geneticists, and advocates of Afrocentrism have argued for years that the first inhabitants of China were Black Africans. According to Chang Hsing-Lang, who was a respected writer and professor in the early 1900s, there was in fact a Negro Empire that existed in the South of China at the dawn of the nation’s history.

However, after hundreds of years of the worldwide spread of the teaching of white superiority and the inferiority of Africans and their descendants, the idea that the first inhabitants of China were Black has been denied and even covered up.

Thankfully, Jin Li, an award-winning DNA specialist, geneticist, and a professor at both the National Human Genome Center and Fudan’s Institute of Genetics in Shanghai, has confirmed through a series of DNA tests that the first inhabitants of China were indeed of African descent.

During his studies, he has collected DNA samples from 165 different ethnic groups and over 12,000 samples in China and throughout other parts of Asia to test his theory. His purpose has been simple: to map historical human migration patterns around the world.

Li and his team found that the Chinese people originated from early humans in East Africa who moved through South Asia to China some 100,000 years ago. He commented, “We did not see even one single individual that could be considered as a descendant of the homo erectus in China, rather, everybody was a descendant of our ancestors from Africa.”  According to Fudan University, in 2019, in recognition of his work, Li was awarded the Chen Award for Distinguished Academic Achievement in Genetic and Genomic Research (2019) by the Human Genome Organization (HUGO).

In conjunction with the Remembrance Project Coalition, NAACP DeKalb will present and support Black History events all year.

Look at the many events or history lessons

Why is it important for African Americans to know our history and teach it to our children? Why is there so much opposition to teaching African American history? Our special keynote speaker, Dr. Akinyele Umoja, Chair of the African American Studies Program at Georgia State University will explain.

See The Rebroadcast of the NAACP DeKalb Black History Program

Black History Books for You

KNOWLEDGE IS POWER!!! Knowledge is obtained through reading. Reading and learning about our true history is so very important especially now. While books (especially textbooks) and media of the past (such as The Birth of a Nation and Amos and Andy, have been used to promote racist ideologies of white supremacy and Black inferiority, the resources compiled in this list provide an overview of Black History and American history (which is our history).

"Our purpose is to reverse the brainwashing and break the cycle. We must make sure that those who will come after us love themseves and fully embrace their African heritage. This must stop with us." Mr. Imhotep

More about this story here

Kwame Akoto-Bamfo is a young Ghanaian sculptor driven by a calling: to sculpt the likenesses of 11,111 enslaved Africans. He is consumed by the impact of the trans-Atlantic slave trade on Africans today who still mourn the loss of their ancestors.

Although 12.5 million Africans were wrenched from their homes and families over this 400-year period, he says the evidence of the slave trade in Africa “is being washed away.” Akoto-Bamfo is devoting his life to honoring their lives of his ancestors through his art, memorializing them not just as slaves, but as people with humanity and individuality.

September 18, 2019, Interfaith Service is the official kickoff to our Journey of Remembrance and Reconciliation. The project is gaining momentum for its third phase, which includes approval by the Board of Commissioners of DeKalb County to erect a marker in Decatur Square; placement of a second marker in Lithonia; and collaboration with EJI to move the marker from Montgomery to Decatur, along with an iron or steel module bearing the names of DeKalb’s lynching victims. These and other related activities will be celebrated during a series of events culminating in an unveiling ceremony and reception. Details of the events will follow. 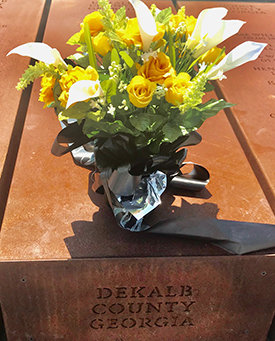 Flowers placed at memorial in Montgomery, AL in honor of lynching victims in DeKalb Count.  The work began in 2018 with a civil rights day trip to Montgomery, AL to visit the museum and memorial established by EJI to the victims of racial terrorism, and is moving into its second phase, which includes an essay contest for secondary school and college students and development of a substantial program of Remembrance Memorials and activities.

NAACP DeKalb Documentary THE JOURNEY - from Remembrance to Reconciliation