President Lance Hammonds is available for presentations and interviews.  Please fill out the form to request President Hammonds. 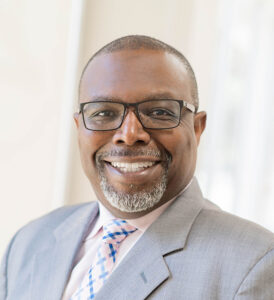 Lance Hammonds is the President of NAACP DeKalb Branch, and committed to the mission of the NAACP to ensure the political, educational, social, and economic equality of rights of all persons and to eliminate racial hatred and racial discrimination. He is a 38-year resident of DeKalb County. He is an accomplished community organizer that believes in the power of a unified community to transform itself.

Lance grew up in South Central Los Angeles. The family arrived there in the summer of 1965 during the Watts Riots. He grew up in the housing projects during a time when gangs were on the rise and walking to school was a daily challenge. He often looks back on those days and wonders how he made it out when many of his friends became addicted to drugs, spent time in prison or were killed.

Lance attended the University of Redlands, in Redlands California, where he earned a Bachelor of Science in Biology with a minor in Chemistry. He later earned his MBA in Marketing from the Keller Graduate School of Management.