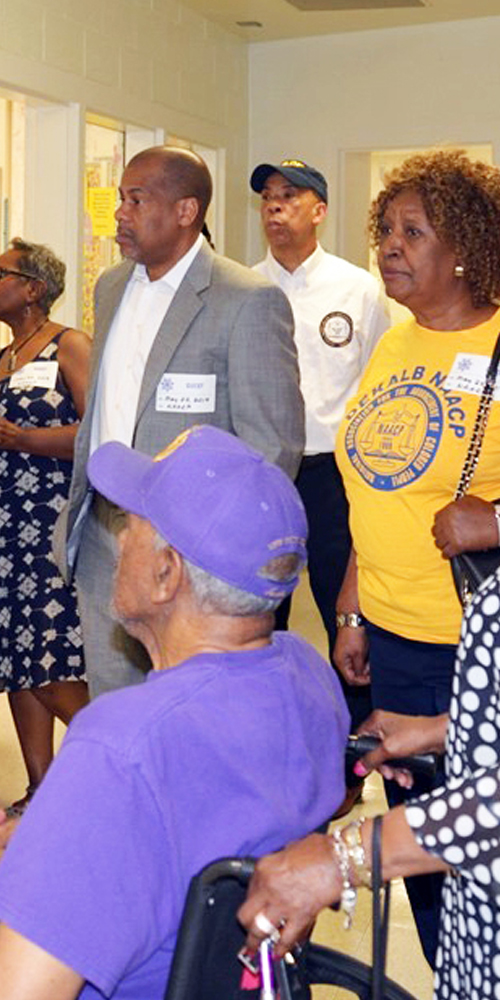 Fighting for Justice Since 1955

Under the Branch’s dynamic leadership, the DeKalb Branch through the years has received many awards for membership increases, political action, voter registration and voter empowerment at Regional, State and National NAACP conventions. Through the collective efforts and sincere dedication of our Branch Presidents, guided by the grace of our Supreme Creator, the DeKalb County Branch NAACP has kept the flame of justice burning brightly. It has continued to be a beacon of hope for the hopeful and the hopeless; and with continued community support it shall continue to be a keeper of the flame of justice in the struggle for equal rights and freedom for all.

The mission of the National Association for the Advancement of Colored People is to ensure the political, educational, social and economic equality of rights of all persons and to eliminate racial hatred and racial discrimination.

The vision of the National Association for the Advancement of Colored People is to ensure a society in which all individuals have equal rights and there is no racial hatred or racial discrimination.

“...I recall so vividly the threats on my life and my family for the work that was being done…” -as recorded by Ms. Rosetta Williams condensed and edited by Ms. Sharon Mills

In early 1955 following several years of soliciting memberships in DeKalb County by the Atlanta Branch of the NAACP, a group of concerned citizens, representing a cross-section of DeKalb, decided to set up a Branch of The National Association for the Advancement of Colored People in DeKalb. This decision set off many doubts and fears in the minds of many citizens. Nevertheless, after one or two meetings the DeKalb Branch was organized at Lily Hill Baptist Church in Decatur, Georgia by Charles E. Price, Executive Secretary for the State NAACP. John Shanks was elected President; Ruby Langford, Secretary; and Earl Gunby, Treasurer. Deacon D.G. Ebster, Mr. & Mrs. Grover Robinson, Harry Furr, David C. Albert, George Hoke, Jimmy Hoke, Jessie Bussey and I, Rosetta Williams, were Charter Members.

The Branch grew rapidly and soon became the second largest Branch in the State.  Because of fear and tension aroused in some people when the name NAACP was mentioned, the DeKalb Branch worked under the guise of “DeKalb Citizens Committee” and launched the greatest Voter Registration Project ever held in DeKalb County.

More than 4,000 voters were added to the roll, including 29 blind clients who had to have special training to pass the voter’s test in order to register. Jackie Robinson, one of the first Blacks to enter the Baseball Hall of Fame, came to Decatur to deliver the keynote address for the Kick-Off Rally.